Today, it's going to be 106 in the valley.  It's hot! My boys have been board for days--too hot to play outside, had enough of the same old toys and routine inside--PLUS, I've been down and out from a bad back and other health issues.  It does not make for a good combination.

Today, totally by accident, I stumbled onto a new exciting idea that is such a novelty, I am currently sitting here in utter quiet while my boys, just three feet away relax and play together peacefully! 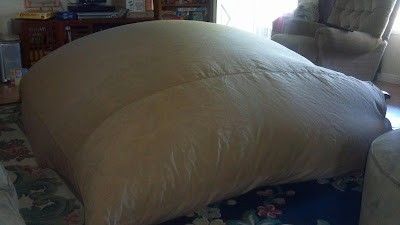 It's called a Fan Fort (well, that's what I called it).  I grabbed my king sized duvet cover--which we are currently not using during summer time--and stuck a fan on high in one side of the opening.  I buttoned up the rest of the opening, leaving a small hole for the boys to climb in and out of.  The duvet cover filled up with air and the boys thought it was the coolest thing ever (literally!).

After climbing it in and checking it all out, they started grabbing toys and even the dog (who also seemed to like it pretty well).  Then before long, Asher came out and got his duvet, his favorite stuffy and a couple of pillows.  It's been quiet now for about 10 minutes! 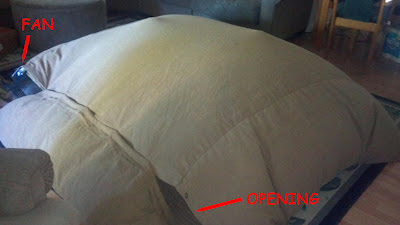 It's super easy to make; all you need is a giant "pillow case" and a fan.  My duvet cover worked perfectly but you could also use sheets as long as they are sealed around the edges (it doesn't have to be a perfect seal).  You could roll up the edges and but clothes pins or safety pins on them to keep the edges together, then stick a fan in an open spot.  I have a pretty powerful circular fan but a box fan would be fantastic, too.  This was so much easier than having the boys build a fort, pulling out every blanket we own and trying to prop stuff under them--and it's super easy to clean up when they're done.   I love it!

Give it a try and let me know how it works for you.
Posted by Heather Molzer at 9:23 AM

Heather Molzer
I am a 30-something wife and mother who is blessed to stay at home so I can serve my family and community! I'm a follower of Christ and though I often fail miserably, I try to live life like he did--loving and serving others. I'm glad he's full of grace! I love being around people, cooking, reading, creating fun activities to keep my kids occupied and going to Disneyland (unfortunately, it's been a while).

Check Out My Other Blog and My doTERRA Site